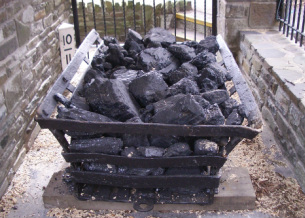 Drams (Iron wagons) filled with coal or stone were taken to the canal on tram-roads for off-loading into canal boats/barges.


Drams similar to this 1860 example were used in the Clydach area.

Canal barges in the wharf (an area on the water's edge for loading and unloading boats) were filled with coal from drams from Graigola (Southern) Colliery (1800-1860) to go down to the dockyards at Swansea.

The remains of the retaining wall of a tram road can clearly be seen beneath a large tree on the golf course on the curve of the Swansea Canal 400 metres north of this building by the 14th Tee. The railway crossed a narrow stream on a tall bridge (the remains of the abutments can be seen beyond the 13th Green) before running south-east across the flood plain on an embankment and then crossing the River Tawe to the Colliery.