The Death Ray -The Secret Life of Harry Grindell Matthews 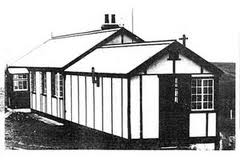 In the remote hills near Clydach in the Swansea Valley stands a large bungalow that was once the laboratory of a scientist known to locals as Dr Death Ray.

Harry Grindell Matthews built Tor Clawdd in 1934 and for the next seven years villagers speculated about what went on behind the large electric fence, topped with barbed wire, surrounding its perimeter.

Although far from a household name, he is credited with inventing the first mobile phone, a remote control boat and a working optical projector, which bore a remarkable resemblance to The Bat Signal, long before it was first used by the mayor of Gotham City to summon the caped crusader.

Matthews built the retreat, complete with its own private landing strip, to escape press and government intrusion after one of his previous projects - The Death Ray - brought him unflattering attention. His story has been pieced together based on new research and documents held in national archives by Nottingham based science teacher Jonathan Foster for his book - The Death Ray - The Secret Life of Harry Grindell Matthews.

Born in 1880 in Gloucester, the first significant date in Matthews' career was September 1907 when he became the first person in Britain to use radio waves to transmit speech.

Two years later he patented the 'Aerophone' which had a range of seven miles.

"He had invented the world's first mobile phone and set up a company to sell it but it just flopped," said Mr Foster.

The author said it was to become a recurring theme throughout Matthews' career.

In the following years he invented a remote control boat, a system for detecting submarines and a camera that could record an optical sound track alongside a photographed image - synchronising moving images with words for the first time.

He travelled to the United States to try and sell his invention but was sent packing by both Warner Bros and MGM.

His most infamous invention was the Death Ray which he began work on in 1924.

Transmitting electrical energy via ultra violet light it was said to be able to make petrol engines stall, melt glass and explode gunpowder.

"It was a very weak device but he wanted to scale it up," said Mr Foster.

People would see strange lights coming from the laboratory

"He claimed that with sufficient power it would be possible to shoot down aeroplanes and explode munitions dumps.

"It caused a sensation in the national press, questions were asked in Parliament and the government demanded a demonstration."

But Mr Foster said although the Government decided not to proceed with it further, it did see the potential and was concerned he would take the technology abroad.

"The Government actually tried to discredit him and he was placed on a blacklist basically because he had snubbed them over the death ray," said Mr Foster.

"They had made him an offer which he turned down."

Matthews was familiar with south Wales as he had conducted some of his radio wave experiments in the Swansea area so chose the hills above Clydach to build his isolated retreat.

During the next seven years he worked on many more inventions including an aerial defence torpedo and returned to his submarine detection system.

Mr Foster said during the course of his research he had spoken to many people in the village who remember stories about him.

"People would see strange lights coming from the laboratory and they would see his aircraft land and take off as he came and went," he said.

"When he went into the village he wore an eye patch, a long black coat and a trilby. They were quite nervous of him.

"It made for a lot of folklore about what was happening there.

"There is a nice story that he had a secret meeting with Churchill in the Mason's Arms pub in Clydach but I have found no evidence to support that whatsoever."

Matthews, who was married three times, collapsed and died on 11 September 1941.

"Fate played against him and he was not the easiest person to deal with," he added.

"He was so unlucky but he was a dreadful businessman and went bankrupt twice.

"The reason for the book was to try and gain him a little more credibility."

The book The Death Ray by Jonathan Foster, is based on new research using documents held in National Archives, and includes many previously unseen photographs.
Published by Inventive Publishing the book is available at Clydach Heritage Centre